Anton Kuchukhidze: Why is the case of Marseille FC relevant for the Ukrainian gambling market? 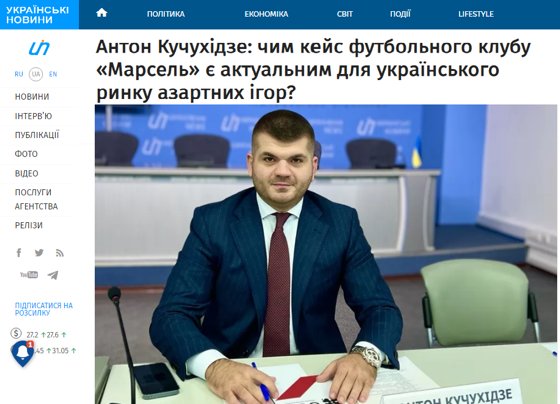 Just the other day, while reading about football, I came across the news on the death of Bernard Tapie, a well-known French businessman, and politician. For football fans, he is also known as one of the most successful leaders of the Marseille Football Club. However, in addition to his footballing achievements, which include the victory of Marseille in the Champions League in 1993, Tapie is also known for accusations of foul play and corruption. In 1994, despite all his successes, Tapie was dismissed from his post, and the title of the Champions League winner was taken away from Marseille. Did this lead to the prohibition of football in France, or the abolition of the Champions League? Obviously, it didn’t.

The Ukraine’s legal gambling market has been operating for over a year already. The efforts made by the State to launch and ensure its operation are immense. The positive economic impact is clear, including over UAH 1.4 billion of the budget revenues in the form of license fees alone, hundreds of new jobs and millions of dollars in investment. However, many pseudo-experts and populists continue to insist that gambling is bad, and that its legalization will only lead to the spread of gambling addiction and money laundering “schemes”.

At the very beginning, it was no coincidence that I mentioned an interesting case of Marseille FC known not only for its vivid performance and victories, but also for being a big international business. Corruption and money laundering allegations are a serious blow to the reputation. However, this was a blow to the reputation not of football as a whole, but of a single, albeit powerful, company.

The responsibility for one’s actions must be borne by an individual business entity, and not the entire industry. This is the only correct legal approach to regulating any industry. No one thinks to prohibit football, which, like gambling, is primarily entertainment, just because one of the teams is suspected of financial misconduct. Then why should legal gambling be treated differently?
It is time for us to clearly distinguish between legal gambling operators that adhere to the rules and are subject to financial monitoring and uncontrolled illegal market participants who may be involved in shady financial transactions. The former benefit the economic system and pay taxes to the budget, while the latter harm the economy and create a host of problems for society and the State. It is illegal market participants that are the major source of the negative image and, as a result, a false public perception of the modern legal gambling industry in Ukraine.

Besides, let us not forget that theoretical “money laundering” through legal gambling operators does not make any sense in practice. In this regard, a quote from Boris Baum, First Deputy Chairman of the Advisory and Expert Council at CRGL, is of great relevance: “For example, smugglers have USD 1 million, which they decided to launder through a casino. To do this, they need to bring to the casino non-declared money in the amount of UAH 45,000 every single day. This will take about two years. And even if that happens, they still need to pay 19.5% tax to withdraw such funds, not to mention the casino service fee.  Can one, by acting in such fashion, legalize any funds? Probably yes, but it will be too complicated and expensive. Hardly anyone would agree to such pointless “laundering”.

The demonization of legal gambling in favour of corrupt officials and illegal market participants must be stopped. The legal gambling sector operates under the rules established by the State, as does the production of agricultural machinery, the sale of food products, or the construction industry. And, as in any other legal area, each company must bear responsibility for its own actions.

Anton Kuchukhidze, Chairman of the Ukrainian Gambling Council, exclusively for the “Ukrainian News”